Please enter your username or email address. You will receive a link to create a new password via email.

Find out about upcoming events at your preferred Vacation Destinations

Walt Disney World Resorts started operations in 1971. Since then, it has grown to become a leading vacation destination for tourists, both old and young. Disney is home to 4 major world-class theme parks: Epcot, Magic Kingdom, Disney’s Animal Kingdom, and Hollywood Studios. The Magic Kingdom recorded 20 million visitors in 2016 as it maintained its status as the most visited theme park for the 11th straight year.

With over 25 on-site resort hotels such as Fort Wilderness Campground & 12 non-Disney affiliated hotels, this delightful place isn’t just a huge theme park, it has numerous attractions. If you find yourself here, there are several other sites that would make your stay thrilling and fun e.g. Disney Springs, Dining, entertainment, and shopping options even without entering the park. If your vacation is planned for the warmer months of the summer, Typhoon Lagoon and Blizzard Beach would keep you super-excited.

You are guaranteed no dull moments when you are within Orlando as there are quite a number of renowned theme parks. Universal Orlando Studios Resorts provides you with sumptuous fun with its Islands of Adventure and Universal Studios. You and your family can spend the day taking in the beautiful sights of Harry Potter World, or take a Splash in Volcano Bay. Staying at any one of the 6 on-site resort hotels would surely increase the beauty in your day. And when the time comes to eat, any of the exquisite restaurants within the park and nearby would provide you with amazing treats. You can take a stroll around Universal’s City Walk close to the entrance and you wouldn’t need any park tickets. On your strolls, you would have a host of things to keep you and your family excited such as shopping, food joints, entertainment shows, and an AMC theatre, etc. And when the kids have gone to bed, you and your wife can hit any of the nightclubs to cap off a memorable day.

Without having to go too far, tourists can also have the pleasure of enjoying SeaWorld Parks and a host of high-class Orlando Resorts. SeaWorld plays host to 3 main parks: Discovery Cove, SeaWorld Orlando, and a water park known as Aquatica. SeaWorld Parks and Resorts provide over 200 acres dedicated solely to fun-filled entertainment right off International Drive. Here, you have many types of food, shopping, and clubs on offer in just one stroll. SeaWorld attracted over 4 million tourists in 2016 only as it ranked number 10 as the most visited theme park in the United States and number 25 globally. 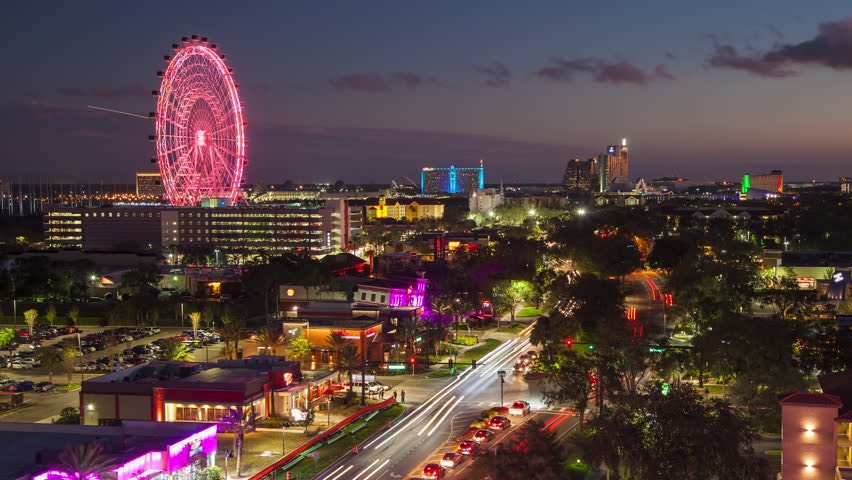 International Drive is arguably one of the busiest tourism centers in Florida. Without going far, attractions such as iFly Indoor Skydiving, SEA LIFE Orlando Aquarium, Ripley’s Believe it or Not, I-Drive Nascar Indoor Kart Racing, Coca Cola Orlando Eye Ferris Wheel, etc. would have you experiencing one of the most memorable vacations ever!

Whether you want an affordable hotel or something with more luxury, several options are available for you such as Hyatt Place, Suites by Marriott, Fairfield Inn, Wyndham Orlando Resort, Embassy Suites by Hilton, Rosen Plaza Hotel, and many other great lodging options. There are several restaurant favorites such as Shake Shack, Maggiano’s Little Italy, Longhorn Steakhouse, Bahama Breeze, Miller’s Ale House, The Olive Garden, Chuy’s, and many, many more.

Downtown Orlando and It's Dazzling Nightlife

Downtown Orlando promises an exciting nightlife for its visitors. Church Street, Downtown Orlando is the central hub for several trendy clubs and hip bars. For instance, this is where you will find Chillers which is a food bar that offers great cuisine and nightclubs like The Attic Orlando or Tier and The Beachham (which is also a concert venue) would have you relishing every moment spent in downtown Orlando. And if you find yourself at the Wall Street Plaza, you will have a host of bars, nightclubs, and restaurants to choose from, meaning non-stop entertainment for you to make your vacation a memorable one.

Always stay ahead by checking concert dates and events as there is always a trending event happening at Downtown Orlando. You will also find the Amway Center, home to NBA’s Orlando Magic and plays host to several concerts by big-name contemporary artists.

From all over the world, Orlando plays host to all sorts of tourists. The City is renowned for its wide range of delightful cuisine options. Victoria and Albert’s located at Disney’s Grand Floridian Resort and Spa would give you a AAA Five Diamond Award™ experience. Chatham’s Place Restaurant and the Bull & Bear Steakhouse situated at the Waldorf Astoria Orlando are also awesome places that offer mouth-watering cuisine options. If you are a food lover, Orlando’s restaurants would make your time in the city a very enjoyable one.

Hard Rock Café located at University City Walk provides a perfect combo of awesome delicacy and a show featuring classic hit favorites. And if what you’re craving is sumptuous southern comfort food, Four Rivers Smokehouse has all your heart desires.

Make time to check the events slated to occur at Florida’s largest convention center – The Orange County Convention Center which has also been touted as the second largest convention center located in the U.S. Occupying about 7 million ft2 of total space of which approximately 2.1 million ft2 is used for exhibition, this center is a magnificent location for tourists. Powered by rooftop solar panels the size of four football fields, this building operates on renewable energy.

Since it was built in 1983, the OCCC has played host to more than 32 million visitors. Several events have used it as the venue for their shows such as Megacon which recorded over 100,000 people in attendance. In 2017, the Amateur Athletic Union Girls’ Junior National Volleyball Championships which is the largest volleyball tournament globally was held here, recording over 70,000 people in attendance. That year, the same amount of attendance was recorded at a Star Wars Celebration held there.

The environs are filled, accommodating a vast range of demographics which contributes to the OCCC’s constant ability to attract such large crowds at events and performances. There are over 100 hotels and restaurants, all within a 10-mile radius of the convention center. To top it off, it’s very close to popular tourist attractions such as the International Drive and SeaWorld, Disney, and Universal.

The OCCC has so much to offer and you most certainly would want to be a part of all these massive fun and entertainment.

If you are planning a vacation within this area, you know the OCCC is a must-visit for you.

Vacation and Business trips have been on a constant increase and have been a major contributor to economic growth. Las Vegas Convention and Visitors Authority (LVCVA) emphasizes this impact by referring to a U.S. Travel Association report which states that “from 2010 to 2015, this industry has provided more jobs at a quicker rate than the remainder of the economy.” The U.S. Travel Association represents all parts of the travel industry and is a national, non-profit organization. According to the LVCVA, “Global Business Travel Association (GBTA) declared that expenses from business trips worldwide increased by 5% in 2015, breaking records at $1.2 trillion.”

According to the GBTA blog, approximately 522 business trips occurred in 2016 alone as reported in its article “The Business of Travel.” This is proof of the ever-increasing instances of business travels and conventions all over the globe. Indeed, the competition among premier facilities such as the Las Vegas Convention Center and Orange County Convention Center, Orlando has become intense, with each aiming to be the preferred host for the most coveted conferences. Interestingly, this isn’t localized to just a few cities, as many metropolitan areas and cities have been making significant attempts to rebrand themselves and increase their appeal to tourists, business owners, corporations, and individuals.

For tourism, the tale is similar, with the U.S Travel Association predicting a significant rise in leisure travel through 2020. It also reports that “direct expenses on travel related to leisure alone both by local and international travelers was estimated at $683.1 billion in 2016.” It was observed in 2016 that at least four out of five domestic trips were for leisure purposes with a figure of 1.7 billion individual trips reported to have been made by U.S residents that year.

In light of these recent developments and the amazing impacts they could have, different locations are investing more into making their sites the preferred choice for tourists either on business or leisure trips.

Nationwide Resorts is here to help you perfect your vacation plans and bring them all to fruition. With the vast abundance in the volume of resorts and vacation destinations available, selecting the ideal one might be quite stressful for you. Our expertise and unique attributes give us the right tools and resources required to help you locate the perfect destination for your next adventure. Whatever you need, we’ve got you covered!